Throughout history, archery bows have been around with different forms. Bows have developed through the ages, and many are now made with elements such as fiberglass, carbon fiber, as well as numerous advanced shooting mechanisms.

Various kinds of bows that are available include the recurve bow, longbow, the compound bow, and the crossbows, giving experienced and new archers a variety of options when it comes to choosing the types of bows for use.

The complexity and skill required to actually utilize the bow all depend on an individual’s art of shooting the bow’s arrows precisely.

For beginners, the highly suggested type of bow would be the simple recurve pieces since the weapons do not feature a pulley system; the recurve bow may be more difficult and challenging to utilize, but it is more adequate for beginners to learn more and better with this type of weapon.

As one’s level of expertise develops, the archer can eventually progress and start utilizing more complex types of bows such as the compound bow.

Listed below are some of the types of bows that are available:

The English longbow is also referred to as the straight-limb bow and is known to be the simplest and oldest of all the types of bows.

This is the kind of tool that the ancient people utilized for battle and hunting though some claim that the weapon is still carried and used by indigenous tribes in various remote areas in the world.

When it comes to the modern longbows, some of these are made out of laminated wood whereas the others are created from various synthetic materials.

The asymmetrical traditional bow – or also commonly called the yumi bow – has evolved from the longbow that was referred to as the maruki yumi, a bow that was developed from a small tree or sapling limb. 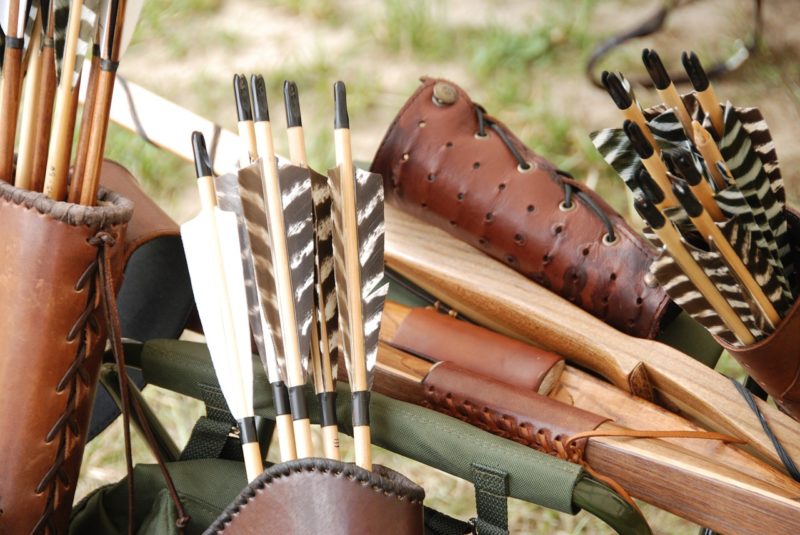 Among the various types of bows, the recurve bows were the only pieces allowed in the Olympics. Aside from the Olympics, a lot of archers also shoot this type of bow in regular and 3D archery, as well as during bow hunting with increased poundage bows.

The recurve bows are generally similar to the longbows except for the end limbs which arch away from the user. A good example of the recurve bow is the Mongolian bow which is described as a specific type of recurved composite bow.

The crossbows were claimed to have originated from China and were mostly utilized for battle during the Greco-Roman, as well as the medieval ages. In appearance, the contemporary crossbows were generally similar to common firearms but these feature a short bow that is fixed to its muzzle.

Since the crossbows have short firing ranges, these require heavier draw weights to perform adequately just like the recurve and compound bows.

The compound bow is considered as one of the most complicated and complex of the different types of bows and it is primarily made up of a riser, string, and two limbs.

Choosing the Right Types of Bows

For those who have adequate knowledge about the different types of bows available, they can readily select their preferred bow, especially for archery.

Aside from the basic types of bows, the recurve and longbow hybrids were also introduced to the market to increase everyone’s choices and options among the different types of bows available.