Seppa is washers that are used and located in front of and behind the tsuba. This part is used to tighten the fittings of the sword. The Katana Seppa is more than just a decorative accessory.

This can be ornate or plain in appearance. This can either be single or two-piece. The tsuba seats in the middle of these spacers. In other words it is located on the right and left of the tsuba. The square mechanism allows the locking mechanism to go through.

The Katana Seppa is considered as important Japanese sword fittings because it acts as shock absorber when the sword comes in contact with its target.

The use of this part ensures a good fit for the habaki, blade, and tsuka. Seppa also separates the blade from the handguard. These are usually made of copper or brass and they come in pairs, usually measure one millimeter in thickness. 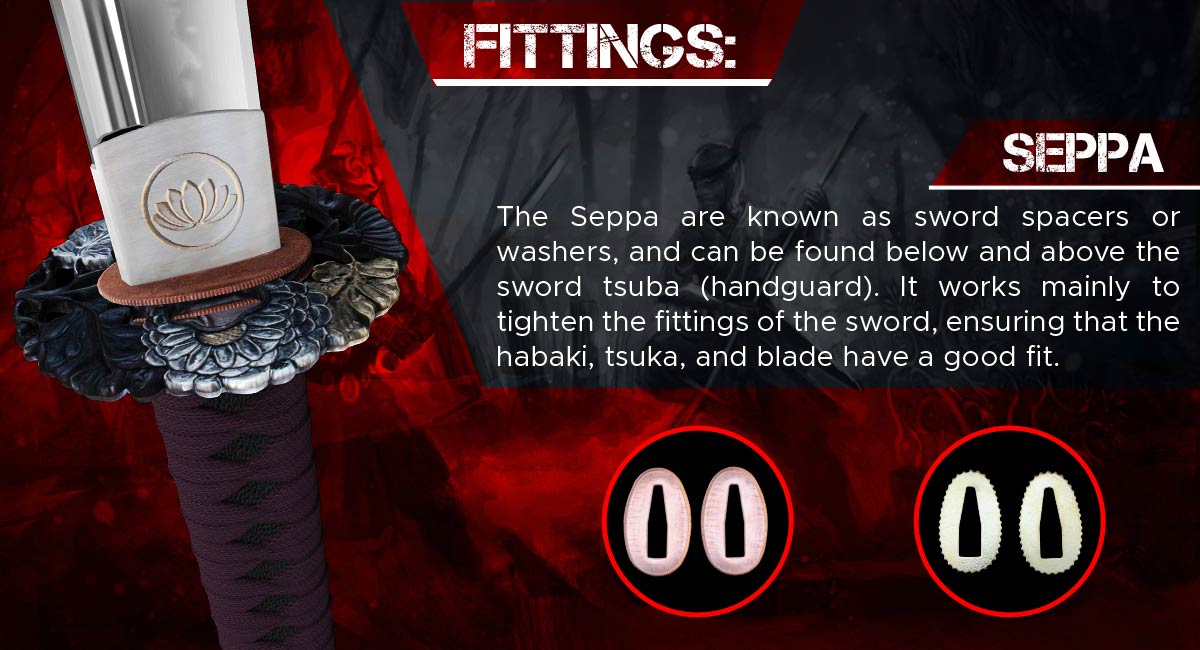 A Japanese sword has two of these washers placed on each side of the guard or tsuba. Katana Seppa was originally used as support. This reinforces the guard to keep it strong.

This allowed the guard to remain thin in appearance. The largest one is referred to as O-Seppa since this is located near the guard. The smaller one is known as Ko-Seppa.

There are two kinds of spacer. The first one is made of a small metal ring. This fits below and above the tsuba. This comes in a design that resembles a winding ivy stem or a rope.

To someone, not that familiar with how this works it is t part just above the fuchi. The function of the second Spacer is to hold the tsuba in place. This looks identical to the first one in every way.

Tsuba is sword guard, located on the top of the handle. Some handguards are made of brass, iron, copper or metal alloy. When replacing the seppa, the tsuba must be removed as well.

Simply put, one of these must match the size of the tsuka while the other one must match the saya. The orientation of the tsuba must be noted as well. This must be done in order to know which part goes where when it is time to reassemble.