Swords were one of the weapons that ancient Egypt was not really fond of since Egyptians often utilized short swords and daggers like the Khopesh sword as a tool for various activities.

However, there was an exception to this and it was the Egyptian sword known as the khopesh a uniquely curved sickle-like sword that has been based from the Canaanites a tool that was utilized to kill en-masse opponents, work as an infantry weapon, and it also acts as a piece to symbolize the authority of Egypt’s nobles.

The khopesh was known as an Egyptian sickle-like sword that was based and has evolved from the powerful battle axes. The term khopesh may have been derived from a leg specifically the leg of beef since it resembles a big similarity when it comes to its shape.

The khopesh sword is described in all aspects of the Egyptian force and it was even wielded by numerous pharaohs of the New Kingdom, simply to destroy enemies on their overwhelming reliefs.

Origin of the Khopesh Sword

The earliest known description of the khopesh comes from the Stele of Vultures a monument that came from Mesopotamia’s early dynasty III era, celebrating the victory and achievement of Lagash over Umma.

The Stele of Vultures illustrated the Lagash’s king carrying the khopesh which dates the weapon to about 2500 BC. Numerous pharaohs have been linked to the khopesh and these weapons have been located in royal graves.

The khopesh was certainly an import and had its origins in ancient Mesopotamia – a number of examples have been found that date from the very beginning of the second millennium BC.

From there, it was adopted very quickly by the city-states of Syria and Canaan and only later, after the Hyksos interregnum, by the Egyptians.

These early antecedents were composed of a handgrip to which was attached a long bronze blade with a mid-rib. The final half of the blade curved out in the form of a C; this eventually evolved and had changed throughout history.

The origin of the weapon can be traced all the way back to the 3rd millennium Sumer and the khopesh sword was generally utilized against the Egyptian soldiers in war.

However, when the Egyptian kingdom began improving its trade relations with other neighboring kingdoms, it eventually adopted the khopesh and began utilizing it during battles as well.

The weapon became most popular and highly noted during the New Kingdom which was under the rule of united Egypt. Ramses II was known to be the very first pharaoh to have utilized the khopesh in battle. 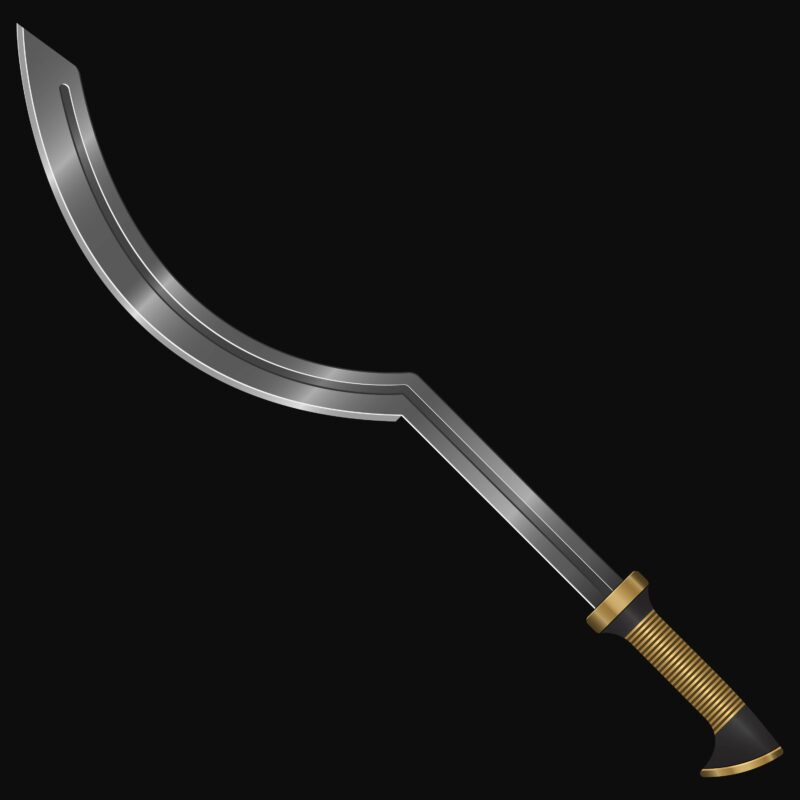 The regular khopesh had a total length of twenty to twenty-four inches in length though there were much smaller pieces that also existed. Most of the weapons during that period were made from bronze or copper which only means that the khopesh was also made out of these materials.

Since these types of metal are not as strong and durable as steel, the blunt edge of the weapon’s tip also served as a highly effective hook and bludgeon; this also added adequate strength to allow the khopesh to be utilized as an ax-style weapon.

Additionally, the weapon’s crook-like arch was utilized specifically to disarm enemies as swiftly and easily as possible. During the New Kingdom era, these type of weapons have evolved from bronze to iron, plus the blade and hilt are cast in a single piece which provides the khopesh with adequate strength.

Most of the surviving pieces of the khopesh sword feature a rather thick cross-section which made it appear too heavy to be utilized efficiently during the battle; it was also quite uncertain how many of the swords were actually intended for use since a lot of these were blunt and unsharpened.

A lightweight khopesh that was effective enough for battle usually weighed around six hundred fifty to seven hundred fifty grams in total.

The blade of the weapon was sharpened only on the outer portion of the blade’s curved end, and the khopesh sword has evolved from the epsilon to a similar crescent-shaped axe that was utilized in war and battles.

One should remember that the khopesh is not an axe and it can never be classed as the said weapon; this is because the axes were made specifically for percussion cuts whereas the khopesh was made to slash similarly to the sabre.

There were a couple of different styles of this type of weapon and these were also very well fashioned in a style that adequately infused the advantages.

The Bronze Age scimitar or the khopesh had a variety from kingdom to kingdom and these samples were mostly dated from the fourteenth century BC.

There were three different versions of the khopesh:

For anyone searching for quality-made replicas of the khopesh, one can readily purchase the khopesh sword for sale from numerous online weapon shops.

The khopesh sword can either be a decorative piece or a fully functional one, but if one plans to utilize the weapon for cutting practice or training, it is best that they choose the functional piece over the decorative one.

The fully functional pieces are thoroughly sharpened so that the user can readily take out the khopesh and use this for slicing and cutting practice.

However, extreme caution should be practiced when wielding such a sword and it is always best to practice and learn the proper moves first before holding the weapon for practice.

As for the decorative piece, these are mostly made with a blunt sword yet are intricately adorned and designed to have an excellent appearance when set to decorate one’s home. It can also be added to an enthusiast’s growing collection of finely made swords and weapons.