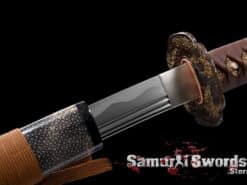 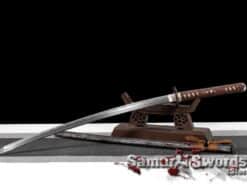 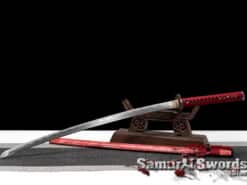 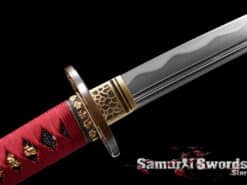 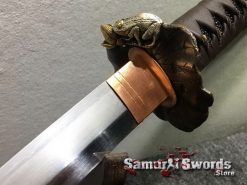 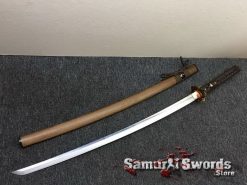 The Tamahagane steel is the famous steel used by Japanese blacksmiths for the creation of samurai swords throughout history. It is a very rare and precious material, which presents its own challenges when using it.

In this article we will take a look at what Tamahagane is, what is the story behind it, what is the forging process like, and what makes it so special.

Are you ready? Let’s get started.

Tamahagane is the traditional Japanese steel used for the creation of some of the most famous samurai swords we know.

It was the most sought-after material in ancient Japan, but if a samurai could not afford it, he also had the Orishigane available, which was made from his leftovers. Or there was the Hocho Tetsu, which was a lower carbon version. We will speak of these later.

The Tamahagane is the same steel that blacksmiths such as Masamune, Muramasa, Amakuni, Kotetsu, and more used to create their renowned blades.

It is composed of both carbon, from the charcoal used during its casting, and steel ore, which comes from the iron sand used (traditionally collected in Shimane).

The combination of both factors is what creates the Tamahagane.

The iron sand is key in this process, because it is what gives Tamahagane its particular characteristics. When it comes to this marial there are two options.

There is also the issue of the amount of charcoal used for the creation of Tamahagane. Historically, the amount of carbon in this steel was 0.50% to 0.70%, which creates medium density swords. However, there are cases in which it could reach up to 1.5%, creating really rigid blades.

How is Tamahagane Steel forged?

At first, the iron sand and the coal are placed together in a special furnace known as Tatara. This is a complex and traditional tool capable of reaching enormous temperatures; it is completely handled manually, without electricity or other types of modern technology.

Inside, the materials are heated to high temperatures that can reach up to 1800 °F, melting them together so that their components mix and give rise to a unique and resistant material: Tamahagane steel.

The process can take from 36 to 72 hours, but this varies greatly depending on the quantities melted and the people working in the process.

From the first hour of the process, the iron sand begins to submerge to the lowest part of the Tatara, creating what is known as a bed of fire. Thanks to its colour, the blacksmith can tell whether or not the steel was formed.

Throughout this process, iron sand is added continuously in short intervals —usually 10 minutes—. This, together with the need to constantly fan the flames using a special tool to blow in air, makes this part of the process one of the most arduous. 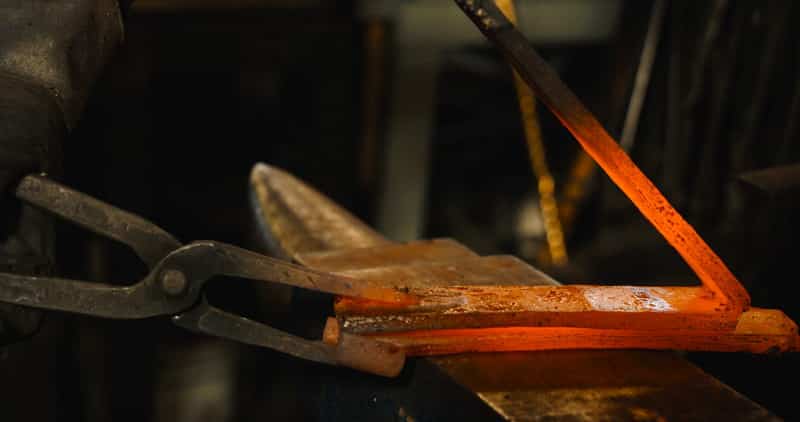 Once this process has been completed, the clay mouldings in the furnace are broken, as there is no other way of extracting the metal. The steel will be at the bottom, and the best parts of it will be the edges.

The quality of Tamahagane can be evidenced by the color. The most brilliant and silvery pieces are pure Tamahagane, and they are the best pieces to forge the blades of the swords.

It is the work of the person in charge of separating the parts of the steel to obtain the pieces with the best consistency of carbon.

Only the best parts with the ideal consistency of carbon are taken into account in the creation of the sword. This is the Tamahagane.

But this opens the question, what about those lower quality parts? Are they still considered Tamahagane? Well, that’s what the next section is about.

Due to how laborious and expensive the process of creating Tamahagane can be, requiring many people and rare materials as you have seen above, and the small amount that is achieved with each foundry, its prices are higher than the rest of the steels.

That’s why this is a material rarely seen in swords today.

This has led, throughout history, to the weakest parts of steel being used to forge things. This lower quality steel is called Orishigane, which is a mixture of the leftovers from the Tamahagane with other types of steel, including old nails or shavings. It also usually contains other types of materials with iron.

Sword forgers in ancient times used to enrich this steel with more carbon, controlling how much carbon was present in the Orishigane. This is a practice, however, that is not seen today when forging swords (being a lower quality steel, it is normal that it is full of problems).

Hocho Tetsu is similar to Tamahagane. The only difference is that it has considerably less carbon, which prevents a sword forged with it from having a sharp edge.

How is a Samurai sword forged with Tamahagane Steel?

Once the real, pure Tamahagane has been extracted, it is time to begin the process of making a traditional Japanese sword blade. However, as you are about to read, this is not an easy process.

Today there are a lot of steels available that are produced in factories like conventional carbon steel or T10, which are relatively easy to convert into swords because they do not present any further complications from the actual forging process. Their composition is always ideal and they do not require special treatments.

Traditionally, this is not the case with Tamahagane.

Tamahagane does not come pure by nature, but is created by fusing iron sand and charcoal. This makes that when observing the final result of the casting, even the best pieces have a high level of impurities.

Too many impurities can damage the composition of the Tamahagane, creating weak points along the steel and making it more possible for it to crack. When the blacksmith receives the pieces of Tamahagane, he looks for those with a better appearance; the brightest and purest.

These pieces do not have as many impurities as others, but they still do. Therefore, it is necessary to get rid of them at the time of the forging.

To do this, Tamahagane’s pieces are initially heated to high temperatures. Then, while these pieces are still red-hot, they are placed on an anvil and hammered repeatedly.

The constant, heavy blows of the hammer compress the steel and cause impurities to escape from it, resulting in fleeting sparks. The initially amorphous pieces of Tamahagane end up, due to the hammering process, converted into thick and small steel plates.

Once enough of these thick steel plates are held, the blacksmith stacks enough of them to create a blade of the desired size and immerses them in fire.

In the traditional forging method, before putting them into the fire these steel plates are wrapped with a paper with writings and then this is covered with clay to prevent oxidation of the metals.

Once removed from the fire, the pile of plates is hammered repeatedly, forming a single, consistent Tamahagane cube. Then the process is repeated several times, putting the cube in the fire and taking it out to hammer it.

Each time the cube is hammered, it gets wider. The blacksmith then proceeds to make an incision in the middle of the cube and fold it up so that he can continue hammering. This process, repeated several times, is the one that removes the most impurities from the steel.

At some point, the Tamahagane is cut into pieces again. These pieces are piled up to form a new block of steel, which is heated, hammered and folded several times.

Completely handmade, the process is incredibly precise. The carbon content of the steel ends up being uniform, with a percentage of carbon that oscillates around 0.70%.

The bending process also causes a series of patterns to emerge along the steel known as Hada. These are literally the layers that originate from folding.

The end result is a strong blade, now free of the enormous amount of impurities it once possessed, made of traditional Tamahagane steel. All that will be missing is the treatments usually given to high quality swords, such as a clay tempering or a Hadori polishing.

Then, a beautiful and deadly blade made of the famous Tamahagane steel will have arrived in the world.

Shaken from head to toe by wars, Japan was a peculiar country when it came to forging weapons and armor.

At first, the general norm around the world was swords of iron and bronze. These, a true marvel of their time, were used for many years, and became essential when facing less developed civilizations, offering a deadly advantage.

The Japanese, for example, owe part of their success in taking over Japanese territory —before it was called Japan— to these swords.

However, over time, the advantages of a stronger and more resistant material, capable of holding a sharper edge, were discovered: steel. And, when steel forging became popular, the Japanese had a hard time with it.

While most advanced countries had access to easy-to-treat steel, Japan had to make do with what it had in its limited territory.

Around the 8th century, Japan’s ironmaking technology took a turn, from importing steel to using iron sand (satetsu) that they collected from Shimane —even today, iron sand for sword is still being collected there.

Because of the loose nature of the sand, it was difficult to use it to forge steel in a traditional furnace. To solve this, the Japanese developed a special furnace called the tatara. 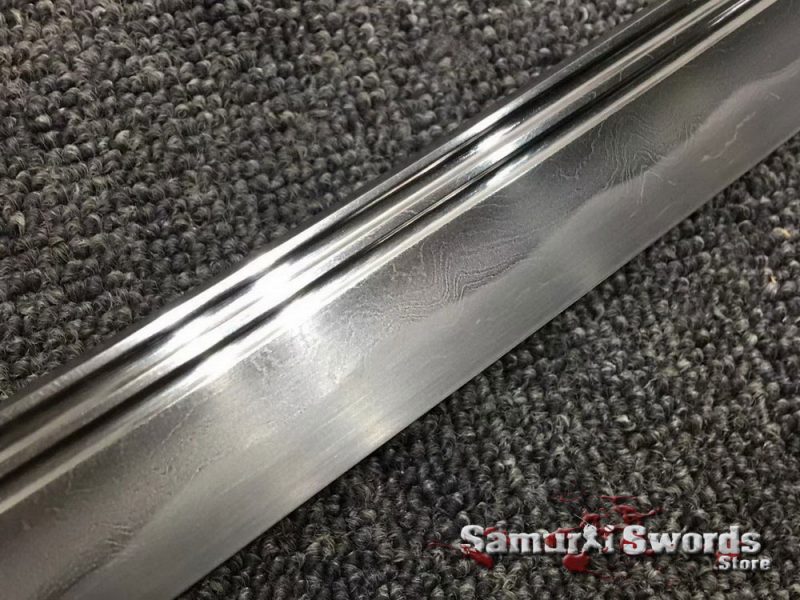 What made the tatara special was the ability to melt the iron sand in stages. Unlike other methods, the charcoal was placed on top of the sand. In addition, the furnace was made of clay, so that it could be broken up once the melting was completed to remove the Tamahagane.

Even without scientific knowledge of the amount of carbon needed in the Tamahagane, the Japanese blacksmiths of the time were able to choose the best parts to create the samurai swords.

It was a craft surrounded by mysticism, in which the blacksmith’s eye and experience was fundamental to classify the Tamahagane steel.

He judged the pieces without really knowing their composition, simply by the color of their edges. And yet, with such a degree of mystery, Japanese blacksmiths were able to create some of the most famous swords in the world, known for their strength, speed, and elegance.

Is today’s Tamahagane the same as the one from ancient times?

Because of the nature of the Tamahagane steel, which can only be built with iron sand, it is the same.

Throughout history, new and more efficient ways of producing steel have been found. Thus, today the industry has a huge variety of steel, each with different characteristics and applications.

Tamahagane steel, however, can only be created in the traditional way.

So important is this steel to the Japanese culture that it is even regulated, which considerably increases the difficulty of obtaining it for sword making.

The methods used for the creation of Tamahagane steel are also regulated. The Nittoho organization strictly controls the process, step by step, to ensure the quality of the sword.

This organization is also in charge of managing the sales and distribution of the iron sand. Analyzing it under a strict control, they are in charge of checking that it meets their requirements, guaranteeing its quality.

This whole process, and the scarcity of iron sand, considerably increases the price of these swords.

However, the possibility of having a real samurai sword made exactly like the one used by these warriors in feudal Japan is worthwhile for many.

If you are looking for a Tamahagane steel Katana, you can create one via our custom form. (3-4 months for production) 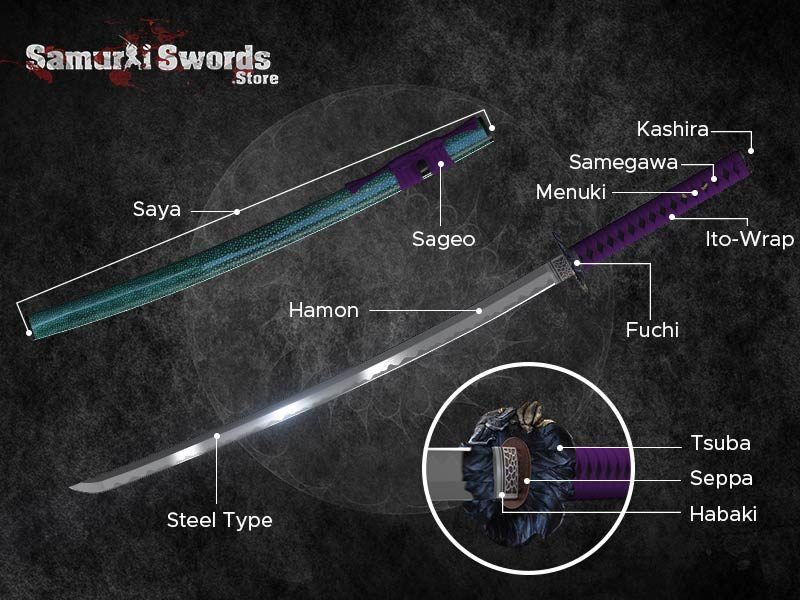