The flatbow is a specific type of bow that features a flat, non-recurved, and relatively wide limb that generally has a rectangular-shaped cross-section.

Since its limbs are wide, the flatbow usually gets narrower and deeper along with its handle which has a rounded and non-bending grip for easier handling.

Advantages of the Flatbow

The flatbow is known to have a superior design since the stress on the bow is spread out evenly compared to bows with rounded limb areas. The bow’s limbs are basically the flexed beams that go through bending, and the farther the flexed beam goes from its natural axis, the more stress will be present within the material.

Once the limbs of the bow are rounded (just like with the longbow), a couple of materials appear and protrude farther from the bow’s natural axis; because of this, the bow goes through more stress in the process.

The flatbow features a flat back and belly to ensure that all the strained components of the bow have a uniform distance from the weapon’s neutral axis; this will help spread the load to a much wider limb to decrease the stress while preventing the chances of weaker wooden bows to fail or break; only the most resilient types of timber can make a highly powerful and effective wooden longbow.

Use of the Flatbow in History

The flatbows were utilized by the native tribes of America such as the Karok, Hupa, and the Wampanoag, as well as the prehistoric European people, the Finno-Ugric nations, a few Inuit tribes, and also a large number of other pre-gunpowder communities utilized flatbows such as the Native American flatbow.

The flatbows became less popular in Europe right after the Mesolithic period and were replaced with the yew longbows.

The flatbow survived in numerous cold places such as Finland even if yew did not grow in such areas due to its unsuitable climate. The classic Finnish flatbow was created out of ash, or even pine or birch that has been glued together using hide or fish glue.

Yew was present in such areas as imported materials to create bows in Finland, and although this was the case, yew was not considered suitable for serious use since the yew flatbow was said to be quite fragile in cold climates. 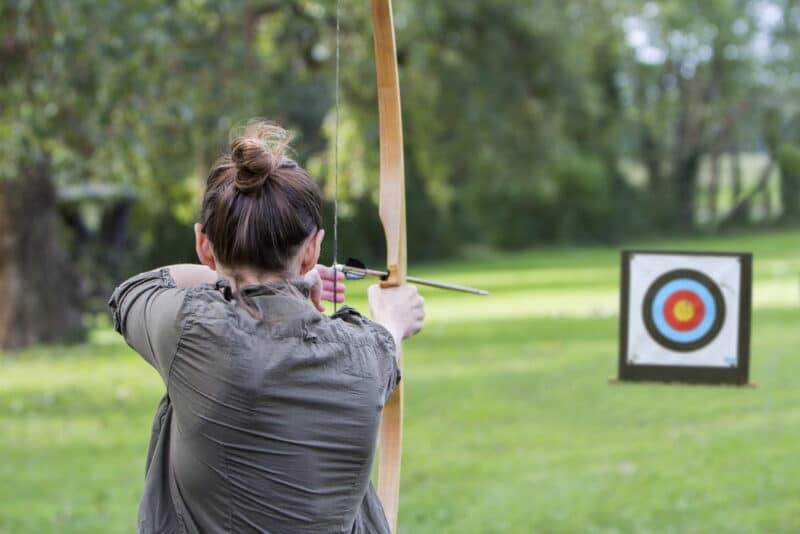 The American Longbow, which is also referred to as the American Flatbow, was created in the year 1930 and was a piece resulting from scientific research to determine the best cross-section shape for the limbs of such weapons.

The research was done to explain why the D-section of the English longbow was highly superior compared to other bow designs; but instead, the search displayed the best cross-section of a bow was just a rectangle.

The American bow was created by utilizing this valuable research information and incorporating these into the English longbow; the result was a more stable and effective bow that can be created with the use of more common types of wood.

And since it coincidentally resembled a few bows from Native America, the American bow was also referred to as the semi-Indian bow.

The American bow was made popular by Howard Hill an archer who was unofficially claimed as the World’s Greatest / Best Archer and this quickly replaced the English longbow as the most favored bow specifically for target shooting.

The contemporary Olympic-styled recurve bow was also based on the American bow and this was usually made from fiberglass instead of wood; it was created this way specifically for the belly and backing of the bow’s recurved limbs.

The design and style of the flatbow are different from the longbow which features rounded limbs that either has a D or circular-shaped cross-section.

Additionally, the flatbow is wider along with the bow’s handle and this can have the same length as the longbow, or it can also be very short.

The typical length of this type of bow usually measures around sixty-eight to seventy inches while the English longbow is seventy to seventy-two inches.

Today, archers will be able to find a wide array of the flatbow for sale, and the classic flatbow is usually the self-bow made from a single, solid piece of wood.

However, there are also composite and laminated flatbows available which were created during the ancient and modern period.