A longbow is a tall type of bow that roughly measures close to or equal to the user’s height. This is the necessary height measurement of the longbow, allowing the user to execute a long draw that reaches at least close to the jaw.

The longbow is not really a recurved piece since its limbs appear narrow; this is essential so that their cross-section has a D or circular-shape.

Materials of the Longbow

In numerous cultures, longbows have been created from various types of wood; in Europe, the wooden longbow dates all the way back to the Paleolithic period and during the Bronze era, the longbow was primarily created out of yew or wych elm if yew was not available.

The medieval longbow was known as a self-bow created out of wood, yet today, modern longbows can also be made out of contemporary materials or by sticking a variety of timber together.

The English longbow was created in such a manner to have a thickness that measures at least 62.5 % of its width; it is also considered widest along the area of its handle.

The bow greatly differs from the medieval longbow since this bow has a thickness that ranges between thirty-three and seventy-five percent of its width. For the medieval longbow, it does not bend through its entire length just like the Victorian bow.

History of the Longbow

The longbow was considered as one of the most favored bows during medieval warfare since this was highly effective in naval wars.

In 1340 during the Battle of Sluys, English archers launched a highly destructive longbow attack on French ships that were tightly packed; in the year 1356, during the land Battle of Poitiers, the longbow was also the reason for the deaths of two thousand mounted knights of France – specifically the elite forces of the French army.

This particular battle in the year 1346 (Battle of Crecy) had English archers sending a devastating attack that left the French people with a large number of losses: eleven princes, one thousand two hundred knights, as well as thirty-thousand soldiers.

During the battle, twenty-thousand English soldiers battled and defeated a total of sixty-thousand French soldiers which only proved just how effective the longbow was for battles. The English knights encouraged the utilization of the longbow by promoting various tournaments with excellent prizes for every successful archer.

Numerous lords also made this art a compulsory practice, and anyone who failed to attend the event was fined a high price. It was claimed that the very first longbow that was utilized came from Wales which eventually spread throughout England.

Design and Construction of the Longbow

Because the longbow can be made out of a single piece of wood, this can be produced quickly and easily. Today, amateur bowyers are able to create a longbow in ten to twenty hours while those highly skilled bowyers, just like those who were able to create the medieval English longbow, were able to produce wooden longbows in just a couple of hours.

One of the simpler longbow designs is referred to as the yew longbow or self-bow. The classic English longbow was also called the yew longbow since these pieces are self-bows that were made specifically from yew wood. However, one should keep in mind that the yew sapwood is only good in tension, whereas the heartwood is better for compression.

However, a lot of compromises should be followed when making a longbow out of yew wood since it is difficult to search for perfect and unblemished yew. The need for yew bow staves occurred during the late sixteenth century when mature yew trees were considered to be almost bygone in the northern parts of Europe.

More than any other type of weapon present during that period, the English Longbow was claimed to be responsible for the vast changes in warfare during the medieval times; because of its excellence and efficiency in battle, the bow made England the foremost and strongest power throughout Europe during the fourteenth and fifteenth centuries.

The England armies became one of the most feared groups in the whole of Europe, yet this was a good cause. Almost every battle that occurred and fought was won by these troops via an immensely smart utilization and formation of archers who fought alongside their men-at-arms. 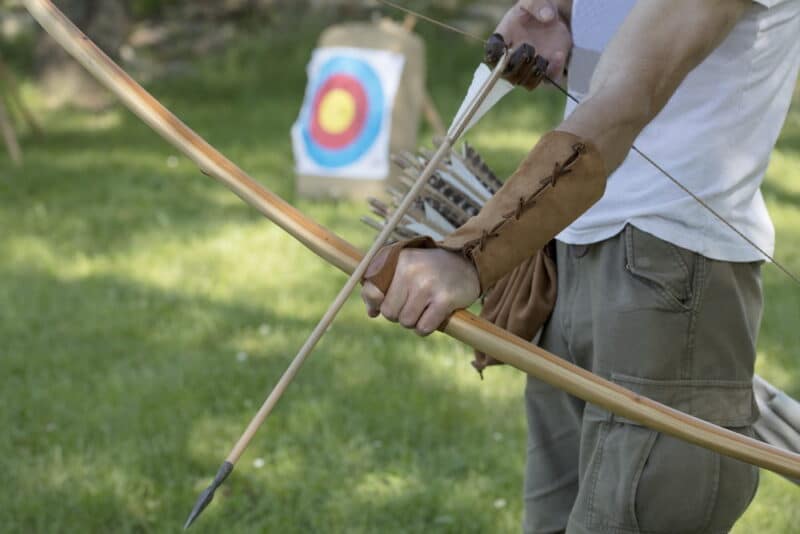 In numerous instances, the English troops were greatly outnumbered, yet because of their intelligent tactics, strategy, and smart use of the proper weapons, the unit was able to claim victory in such instances. The English Longbow is known as a yew longbow or a self-bow that is made from one piece of wood that has been seasoned and shaped for the purpose.

The longbow wood of choice had always been Yew, but due to a few availability problems, makers usually needed to utilize other materials such as Ash and Wych Elm as substitutes.

A plethora of different kinds of longbow arrows were used from the English longbow: differences in its fletchings, length, as well as heads, were all recorded. Yet the greatest and most notable diversity probably lies in the bow’s hunting arrows that feature varieties such as the broad arrow, dog arrow, wolf arrow, the Scottish arrow, and the Welsh arrow.

War arrows were also available and these were ordered very large numbers for medieval navies and armies; these were usually supplied in sheaves that commonly contained about twenty-four arrows in total.

A highly effective yew longbow can be produced using available local materials that can be found in almost all the inhabited parts of the world, along with limited tools with functions such as shaving, chopping, and scraping.

The longbow has possessed both accuracy and excellent range, though it was rare for it to feature both characteristics at once; additionally, scholars have estimated that the longbow range falls between a hundred and eighty to two hundred seventy yards.

A longbow has practical and great advantages unlike a few contemporary compound or recurve bows; it usually features a more lightweight body, as well as the characteristics to quickly prepare for shooting quietly. Though the longbow has a lot of advantages, the modern bow can still shoot arrows faster and more accurately compared to the longbow.

Today, a lot of people will be able to find a longbow for sale, and in online weapon shops today, the traditional longbow is present and this is usually the wooden self bows that are known to be made from a single piece of strong, solid wood.