One of the most important parts of the Katana has got to be the Tsuba. This Katana part protects the hand of the sword owner from sliding into the blade, helps to balance the sword and is used when drawing the sword from its saya.

There are actually many different kinds of Tsuba that you can choose from using our app, we offer quite a selection of beautiful artworks and themes, which you can find one or many to match your style.

The handguard is handmade and because of this it is widely valued and collected by those who love Japanese swords. There are also special schools that teach the crafting of making a Tsuba.

In our app, there are several kinds of material you can use for Katana handguard: iron, brass, copper or metal alloys. Sometimes a Tsuba from our collection can get out of stock, and needs to be made (Which might take a while, or not) we will inform you if that is the case, and you can either choose a new one or wait.

The other fittings of the Katana can also be matched with the handguard by a certain theme or style you can choose. Download the app and start customizing your Katana in the link below:

Getting to Know Katana Tsuba

The history of the Tsuba can be traced back to the earliest swords. Removable handguards can be found on burial mounds from as far as 300 to 400 A.D.

These are better known as Hoju or Toran Kei. Hoju means jewel while Toran Kei means upside-down egg shape. These are the earliest designs of the tsuba that came after.

Tachi was worn by Samurais while Uchigatana was worn by foot soldiers. There are remarkable differences between these two handguards used by different people from different levels of Japanese society. Tsuba is not merely a part of the blade but, is an art form by itself. 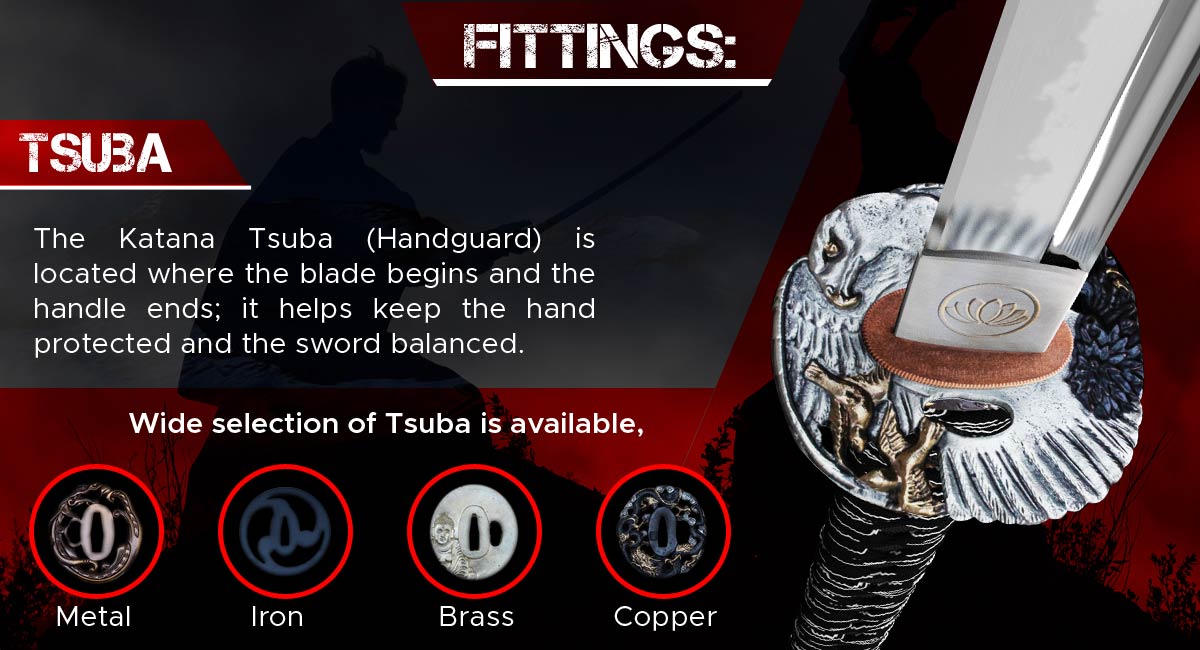 There are many different types of Tsuba designs that you can use for your sword, the best way to find one is download the app and see how it looks with the other parts of the sword, and how each part compliment the other, among the selection you can find the following themes:

Antique Japanese Tsuba can be rated by using this scale:

During the late Edo, Meiji and Showa period in Japan, there are many cast copies made of Tsuba for the export market. These are not originals like those found on early designs.

Cast copies have casting flanges on the inner edges of the hitsu-ana and sukashi regions. Some say that old versions include kettle caster or antique cast iron, however, debates still run until today if this exists at one point in history or not. However, genuine copies are rare.