The scimitar is a kind of sword that features an arched blade with a sharpened point and is categorized as part of the numerous cutting weapons that have been utilized in a lot battles; also, the weapon has been identified with the Saracens during their battle against the Crusaders.

The scimitar is also similar to other cutting equipment such as falchions and sabers since these are known to be highly efficient when it comes to slicing and inflicting significant damage to one’s enemies. Furthermore, the scimitar sword is also mostly utilized as a symbolic image by numerous groups like the Muslims.

Origin of the Scimitar Sword

The scimitar is considered as a saber or backsword with a curved blade and is known to have originated in the Middle East. As for its name, it is said to have been based from the Persian word Shafsher which translates to lion’s claw a description that best describes the scimitar’s curved and long appearance.

The use of the weapon dates all the way back to the eighteenth dynasty of Egypt in 1600 BC, and the popularity of the weapon slowly spread throughout the whole region due to the numerous cultures that have introduced their own interpretation of the scimitar. Furthermore, the weapon was also utilized in the ninth century in various Muslim regions.

Characteristics of the Scimitar

The scimitar sword is described by having arched blades that come in two unique styles such as the deeply curved blades or the narrow and long ones. Its blade also varies in length and these usually measures between thirty to thirty-six inches.

These swords were primarily utilized as weapons for close range cutting but it was typical for soldiers to wield the weapon while on horseback. An attack from the scimitar could cause great injury to an enemy since it is a weapon that is similar to sabers and falchions.

Uses of the Scimitar Sword

Numerous medieval swords were utilized in warfare during the middle ages and the scimitar was one of the medieval weapons used together with the longsword, falchion, greatsword, and the broadsword.

The weapon was commonly utilized in warfare on horseback and was primarily used for slicing the enemy; this was possible since the scimitar was lighter compared to the bigger and heavier swords that were available so it could be carried with ease while on horseback. 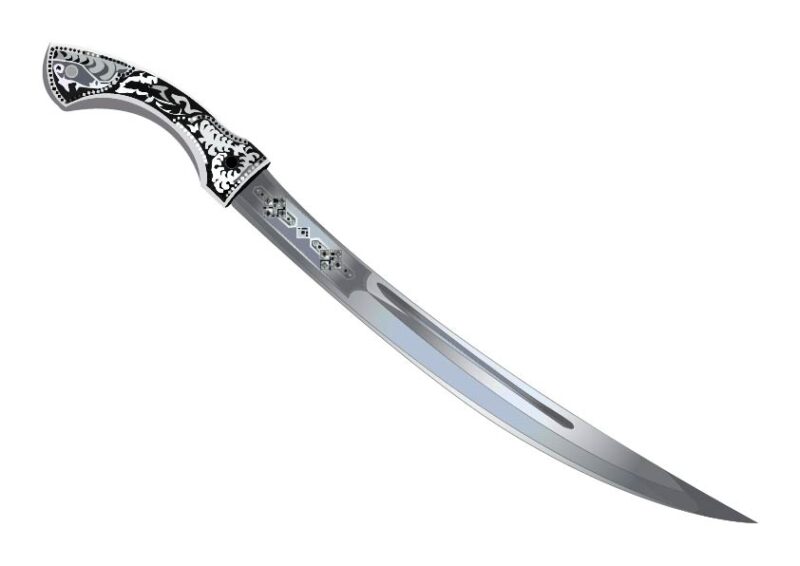 The Scimitar Swords and its Variants

Listed below are the different types of Scimitars that were utilized for battles and other tasks:

The Shamshir of Iran

The Shamshir or sometimes referred to as the Mameluke Sword belongs to the collection of swords of the Seljuk empire, and later on adopted the name Shamshir when the weapon was taken to Persia in the twelfth century.

The term Shamshir literally means sword and it is part of the radically bowed sword family which includes the Talwar, Pulwar, Kilij, and the Saber.

The Kilij of Egypt and Turkey

A kilij is a specific type of single-handed and single-edged blade that is also considered as a slightly curved saber. It was utilized by the Turks as well as other related cultures throughout the late Hsiung-nu period until the later Turkic Khantes of the Eurasian and Central Asian steppes.

This weapon is known as a single-handed blade that comes from the northwestern portion of Africa; it can also be found in Morocco and the west portion of Algeria as a type of saif or scimitar.

With the numerous varieties of possible designs of the Nimcha’s blade, it is claimed that the weapon is extremely distinct and unique since it also sports a forward-pointing quillion; additionally, the sword also featured wooden handles together with squared-off hooked pommels.

The Nimcha’s cross-guard often features a knuckle guard which can be located below the quillion and runs all the way down the pommel. The weapon’s appearance strongly resembles the weapons of the Arabs.

The pulwar (also called the pulouar) is a single-handed arched weapon that originates in Afghanistan; it is known as the classic weapon of the Pashtun people mostly east Iranian individuals who live in Afghanistan and Pakistan.

Talwar of the Indian Subcontinent

The talwar is a kind of arched saber or sword that comes from South Asia; it can also be found in modern countries such as Pakistan, India, Nepal, and Bangladesh.

This is a kind of knife or sword that is usually carried by the Sikhs and when the weapon is characterized, it has a single cutting edge that may either be sharp or blunt.

These blades often have a measurement of about three inches and nine inches, plus these are made from high-quality iron or steel.

Shotel – the Horn of Africa

The shotel is known as a sword with an arched blade that originates in Abyssinia or also known as ancient Ethiopia. The type of scimitar sword appears similar to the scimitars of the Near East yet its curve along the weapon’s blade varies from the Shamshir which almost adopts a semi-circular form.

The blade of this weapon appears to be double-edged and flat with a diamond-like cross section; it measures about forty inches in total while its hilt is made of a simple wooden piece without a guard. The shotel was commonly carried in a close-fitting scabbard made out of leather.

The Scimitar for Sale

Every sword enthusiast or practitioner would want to get their hands on a beautifully-made piece such as the scimitar; and in numerous online weapon shops, one can readily find and purchase a scimitar sword for sale.

There are two categories to choose from when selecting a scimitar sword: one is the fully functional weapon that can be used for form and practice sessions and the decorative piece that is perfect for adorning one’s home or adding it to one’s growing collection of medieval weapons.