The most sought after Katana Samegawa is made of high-grade ray skin. No matter the size of the handle needed for the sword, each skin is unique in appearance. Samegawa is also known as Same-Kawa.

The Samegawa wraps around the wooden core of the tsuka (handles/hilt). The handle is made of wood. normally it is a solid core with rayskin panels from each side, but some request a full ray skin Samegawa (we can do it by request and for extra payment).

All that it does is to have a slimmer weaker core in favor of full wrap. The important part of the process should be to soak raw and wrap tanned leather Katana Samegawa to dry and condense. This is how it will add strength to the Tsuka. How fat this would be will actually depend on the thickness of the wood. 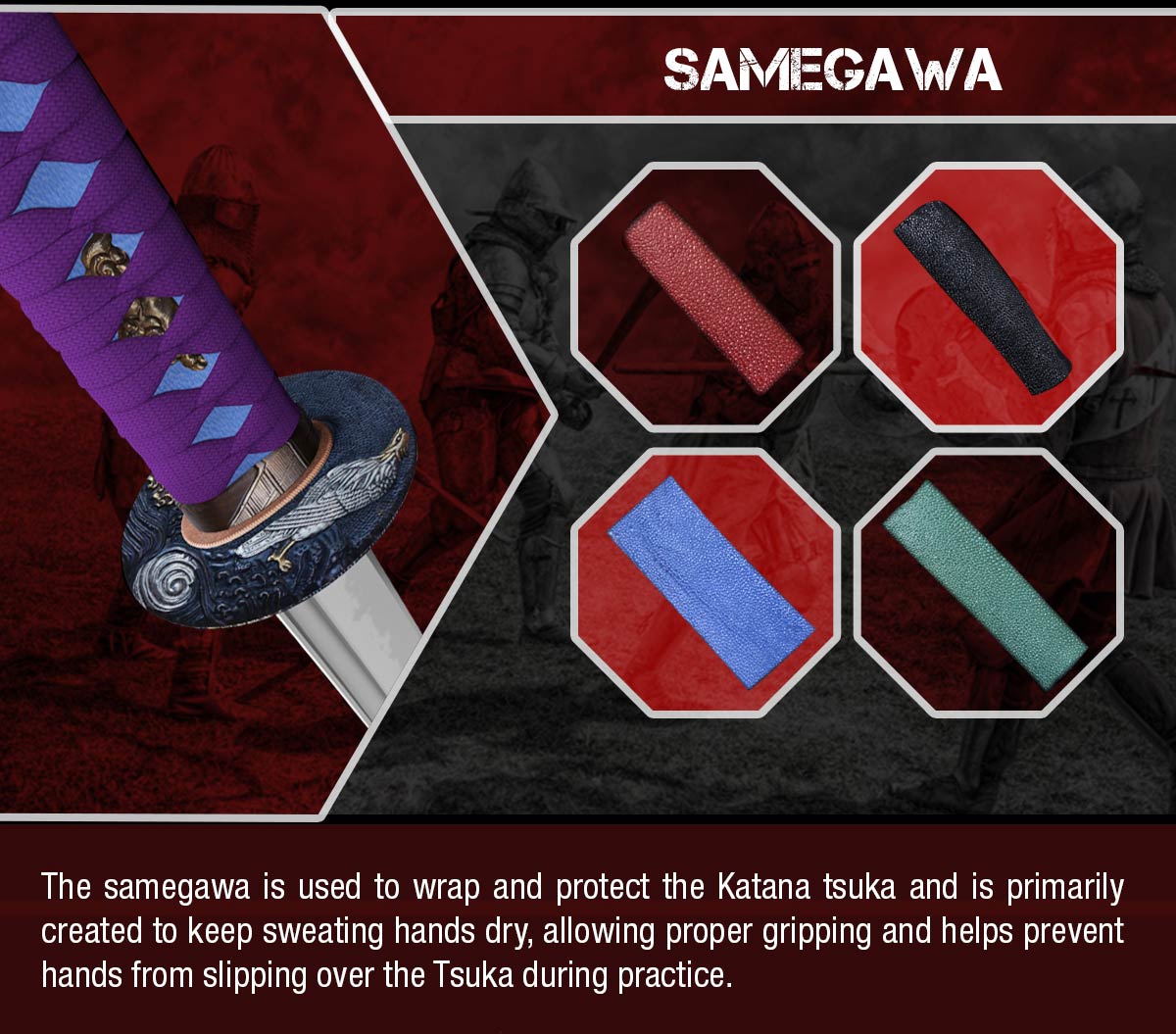 Tanned leather is tough as evidence these are used to manufacture motorcycle seats and gun holsters are made out of this material. Although this is a very tough material the strength of the core lies in how it is prepared and how the Nakago is carved.

This must be done the right way. As a rule of thumb, better quality cost more. The same forging method used by ancient Japanese sword makers that produce a sharp razor sword is the same method used to create accessories like this for the sword.

Our swords come with genuine ray skin handle and you can choose the material used for the fittings, steel and a lot more. The nodes found on the Samegawa have tiny hooks.

This helps in keeping the Ito in place so that it won’t loosen up, this encourages better grip. In other words, there are no slip-ups and accidental cuts. Some say that shark skin also serves the same purpose as ray skin.

Getting to Know Katana Samegawa

There was a time when the samegawa was not in use. When the reason for using Samegawa for the Katana was discovered, swordsmiths start to incorporate it in the traditional process of Japanese sword making.

Samegawa is also referred to as the Same. This was popular during the Heian period which covers 794 to 1185 A.D. It is skin from the belly of ray. This is specifically cowtail stingray that has a rough and granular surface.

This is used to decorate the Saya and to cover the hilt while it allows the sword owner to grip the blade. Some common terms used for this wrapping are Same-Tsuka which means unwrapping the hilt covered with ray skin.

Special care and attention must be given to the outer dimensions of the hilt, Fuchi, and Kashira so that it would be easy to wrap this. Samegawa-Zutsumi no Tsuka is the general term used to describe ray skin cover. This can be applied in three ways to the Tsuka.