Rapier which is also sometimes referred to as the Espada Ropera is a term used to characterize a sword that features a sharp and slender point; and with its kind of design, the rapier is made perfect as a thrusting weapon.

However, slashing and cutting attacks have also been executed based on records coming from historical treaties such as the Gran Simulacro from Capo Ferro in 1610.

A vital social characteristic of the rapier sword was its status as a weapon for civilians; and prior to the Renaissance period, the weapon was considered as an image of the titled classes.

Yet as time passed, when the prosperous merchant class began to rise, the weapon was utilized by the upwardly mobile if it was not a piece that bestowed class, the Musketeer rapier was utilized by a gentleman who was expected to be able to defend his honor at all cost.

Although this was the case, the Renaissance rapier was not a weapon that was universally accepted especially as a piece used for war.

The use of armor during the period was greatly reduced, but it was still worn by the military men; they also preferred carrying heavy, single-edged weapons since it reassured them of its presence and durability, unlike thin and fragile-looking pieces such as the rapier.

Origin of the Rapier Sword

The rapier was first created in the year 1500 and was called the Spanish Espada Ropera or simply the dress sword. It was known as a civilian’s cut and thrust weapon that was utilized mainly for duel and self-defense; although there were also other heavier and stronger weapons available, this was not used on the battlefield, unlike the others.

As the sixteenth century passed, a variety of fresh, single-handed weapons was being created: in the year 1570, Signior Rocco Bonetti (an Italian swordmaster) first set foot in England to advocate the use of the rapier sword for thrusting which is something opposed to slashing and cutting when engaging in a duel.

Characteristics of the Rapier

The term rapier generally refers to a rather long-bladed weapon that is described as having a protective hilt that is made specifically to protect the user’s hand while wielding the weapon; some of the historic rapier sword samples also exhibit a broad blade that is fixed on a regular rapier hilt.

The word rapier can generally be confusing since it can also be categorized as a type of broadsword; yet while the blade of the rapier sword may be broad enough to slice to some degree but of course, this was nowhere close to wider and bigger weapons utilized during the Middle Ages and it was also created to execute nimble and quick thrusting attacks.

Its blade may be sharpened throughout its whole length, or simply from its center to the tip.

In the year 1670, a rapier master named Pallavicini strongly encouraged the use of blades with two cutting edges; an example of these types of weapons would weigh around 2.2 pounds with a long and thin blade that measured around 0.98 inches in width and its length would be around forty-one inches or more while having a pointed and sharpened tip.

The blades of a few historical samples such as the seventeenth century’s Italian Rapier can reach over forty-five to fifty-one inches. Rapiers usually feature a complex design for its hilts which is mainly to protect one’s hand when handling the weapon; rings are lengthened from its crosspiece whereas other samples have rings that are wrapped in metallic plates.

Eventually, these have evolved into cup hilts which were present in later rapiers. Numerous hilts featured a knuckle bow that extended from the crosspiece to protect the grip; it was usually made of wood wrapped in a special type of wire, cord, or leather.

It is usually decorated with a thick pommel that secures the grip to the rapier to provide adequate weight which will properly balance the lengthy blade.

The Ricasso is known as the rear portion of the weapon which is usually unsharpened; it is extended from the quillion or the crosspiece then increasingly integrates into the sharper and thinner part of the weapon.

The rapier evolved and developed over two-hundred years from the cutting swords of the late fifteenth and early sixteenth centuries; eventually, it transformed into the thrusting swords that were primarily utilized from the middle to the late seventeenth century.

It may even be deduced that the rapier developed into the small sword that was utilized during the seventeenth and eighteenth centuries. There are basically just two types of rapiers and these are the following:

These are made specifically by rings; the swept hilt rapiers were considered to be quite long but not too thick. It also had an arched-shaped guard to safeguard the user’s knuckles when utilizing the sword. This weapon also featured one or two outside rings together with a lot of loops that go through the front or behind its grip.

However, the swept hilts were eventually replaced by a metallic bowl which often had a depth of about three to four inches; inside the bowl, one would find the Ricasso that was flanked by the pas dâne which was a ring-shaped guard. 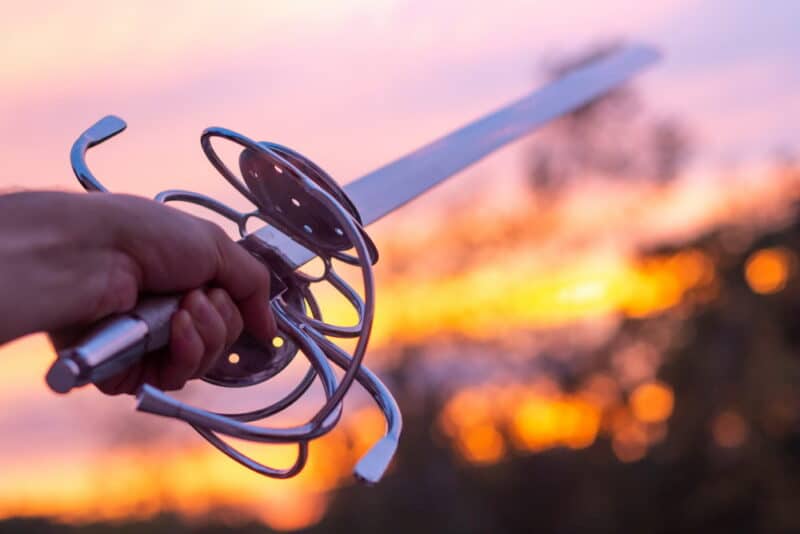 Since fencing also developed and evolved throughout time, those engaged in this required further protection which is why the cup was created, thus, giving the weapon its name the cup hilt rapiers.

The knuckle bow of the rapier was preserved while the quillons eventually became straight and commonly wide; this specific form was kept until the early 1700s, most especially in the hands of the Spaniards.

For those who have found interest in this type of weapon, one can find a wide array of rapiers that are sold in numerous online weapon shops.

These are featured in various styles and designs to provide a swordsman, practitioner, or a collector the freedom to choose their preferred rapier. Some varieties of these weapons include the musketeer rapier, the Spanish rapier, as well as the French rapier; additionally, one can also find a fencing rapier that is fully functional that which can be utilized for training.

Decorative rapiers are also available which is perfect for collectors who wish to add more excellent and finely-made pieces to their growing set of weapons.