One of the most powerful daimyo in feudal Japan has got to be Oda Nobunaga. It was Oda who tried to unify Japan during the Sengoku period. He was able to take control of Honshu.

His greatest achievement was to be one of the three main figure heads that unified Japan along with his retainers: Toyotomi Hideyoshi and Tokugawa Ieyasu. He was credited for taking control over Honshu.

Oda Nobunaga is a ruthless ruler who brutally suppressed his enemies. He annihilated those who refused to cooperate with him.

To his name was credited not just being a victorious ruler in battles but, other ventures that improve the economy of his people. He encourage free trade and ushered in the Momoyama historical art era.

Oda Nobunaga was born in 1534. He was given the name of Kipposhi as a child. His father was a deputy shugo which was equivalent to a military governor Oda Nobuhide Nobunaga’s father has land holdings in Owari Province.

There is still a debate whether Nobunaga was born in Nagoya Castle or not. During his teenage years he has exhibited bizarre behavior that he was dubbed as The Big Fool of Owari. As a young man he was uncontrolled and run along with other young men of his time.

Although Oda Nobunaga was the legitimate heir of the Oda clan those who were part of the clan was divided against him. He was able to gather a thousand men to suppress the members of his family.

He was hostile even towards his younger brother Oda Nobuyuki. He destroyed a rival branch which was located in Kiyosu Castle. Nobuyuki together with his followers remain at large.

Before Nobunaga turned towards this group he first came to the aid of Saito Dosan. Dosan’s son betrayed him which ended having his son Yoshitatsu killed.

This did not end in Nobunaga’s favor though, since Saito Dosan was killed during the Battle of Nagara-gawa and Yoshitatsu became the new master of Mino.

During his lifetime Oda Nobunaga was able to do all of these:

Oda Nobunaga At The Battle of Okehazama

Imagawa Yoshimoto marched with his army of 25,000 men. He pretended to help the failing Ashikaga Shogunate. His real motive was to march towards Kyoto.

For these efforts the Matsudaira clan sided with Yoshimoto’s forces. Oda Nobunaga plan a counter attack sending only a small number of men: about 2,000 to 3,000.

Nobunaga take advantage of the time when his enemies were resting in a narrow gorge. He found a way to create a dummy army by using straw and spare helmets to create an impression of a bigger number of army.

One part of Nobunaga’s army was in charge of this while the other Oda clan army march on behind Yoshimoto’s camp. The surprise attack made Oda clan’s small army victorious over his enemy.

It was during this battle that Oda started to notice the skills of the sandal bearer which later on would become known as Toyotomi Hideyoshi.

Create Your Custom Katana in 3D

if you still haven't tried the 3D app, download now and design your sword while seeing the outcome before ordering, create your custom Katana within minutes. 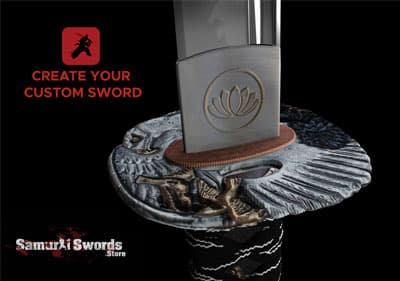 In a weakened state because of Imagawa’s death by sword, this clan no longer has control over Matsudaira clan. The head of this clan was Matsudaira Motoyasu which is now known as Tokugawa Ieyasu.

Even with the decades old hostility between these two clans they agreed to patch the differences to become allies in war. Oda also formed another alliance with an equally strong and powerful Shingen clan. He allowed his daughter to marry Takeda Shingen’s clan.

When Saito Yoshitatsu died from natural causes his son Saito Tatsuoki succeeded him. This new ruler was young and inexperienced as a leader. He was not a great military tactics planner like his father and grandfather.

Oda Nobunaga saw the opportunity of starting a campaign in Mino during the Battle of Moribe. Oda was able to convince the Saito’s retainers that he was a better leader than what they have.

He was able to launch a final attack that allowed him to capture Inabayama Castle.  The castle and its surroundings was renamed Gifu. Until today, the remains of Gifu can be seen in Gifu Park.

Aspirations and Ambition Of Oda Nobunaga

Oda Nobunaga was known for his ambition to conquer the whole Japan. He also used his personal seal that reads Tenka Fubu. This seal when translated means Rule of the Empire by Force.

Its rough translation is Unification by Military Rule. He asked his Zen monk friend Takugen Shuon to design this seal for him. This coincides with the founding of the new city Gifu in 1567.

A little trivia about Gifu, before the city was named Gifu Nobunaga first conquered Inoguchi. This was Oda’s real intention and purpose.

After his brother Yoshiteru was killed Yoshiaki approached Nobunaga to seek revenge on his brothers’ killers. Prior to seeking the help of Oda, a puppet shogun Ashikaga Yoshihide ruled Kyoto.

Nobunaga agreed to install Yoshiaki as the new shogun. He started his campaign against Yoshihide. However, this was met with resistance since Rokkaku clan does not recognize Yoshiaki as Shogun.

This clan was ready to go into battle. Nobunaga launched a counter attack that drove the Rokkaku clan out of their castle. Victory was in his hands as he entered Kyoto.

As promised he installed Yoshiaki as the 15th shogun of the Ashikaga shogunate. However, the relationship between this two did not grow. Nobunaga showed his respect to the Emperor though.

Oda Nobunaga fought a lot of battles against his competition. In the Battle of Anegawa, the Asakura clan recognize that Oda Nobunaga’s power was growing.

Azai Nagamasa even if he was married to Oda’s sister broke the alliance towards his brother in law. He sided with the Asakura clan. In this battle Tokugawa Ieyasu joined Nobunaga to defeat this alliance of Azai and Asakura clans.

A monastery joined this group of anti-Nobunaga rebels. As a result, Oda revenge and attacked Enryaku-ji and razed it to the ground. He spared even innocent lives not just the monks.

He demolish the monastery to the ground killing women and children in the process. The entire mountainside became a madman’s slaughterhouse and those who have seen it feel that it is unbearable to behold.

It was during siege of Nagashima when Nobunaga was able to mete tremendous losses towards the Ikko Ikki rebel. These rebels oppose samurai rule.

The siege only ended when Nobunaga surrounded the enemy complex setting fire to their camp killing tens of thousands. It took about 11 years before it ended before he was able to take down the major stronghold at Ishiyama Hongan-ji.

Oda Nobunaga was in alliance with a strong and powerful man: Takeda Shingen. The shogun have prompted Shingen to take over the capital by first invading Tokugawa territory.

Shingen was pressing towards Tokugawa Ieyasu. Nobunaga was asked to come to the aid of Ieyasu. Oda hesitated because technically he was an ally of Shingen.

However, it was implied that if he did not come to his aid this would put their alliance in peril. Later on, Oda fought with Tokugawa Ieyasu to destroy the Takeda clan with the strategic use of arquebuses.

This expedition was for a traditional tea ceremony. He had only a small retinue of 30 men while his son came along with only 2000 cavalrymen. It was this opportunity that Mitsuhide took to attack this small number of troops.

He surrounded Honno-ji while he send another unit of Akechi troops. These troops close and burned down the temple. It was at this temple where Oda Nobunaga was at.

Oda Nobunaga ended his life in one of the inner rooms of the temple while his son Oda Nobutada was killed by the enemies.

Oda Nobunaga was a military expert who changed the way war was fought in Japan. His army was known for their effective displacement of mounted soldiers that are armed with bow and arrows.

He was responsible for building iron plated warships. His foot soldiers were well trained and was known for being discipline. During this period, the soldiers favor mass movements instead of focusing of using hand to hand techniques.

These developments boost the economy but, it he remain dependent on daimyo’s support. Oda Nobunaga was involved in infrastructure even during feudal Japan.

He set the standard that made it easy to transport soldiers and other war materials aside from doing business. He was given the honor of being a senior first ranking member of the Imperial Court.

It can be said that the victories that propelled Toyotomi Hideyoshi lies on the work of Oda Nobunaga. If he did not died earlier who knows where his career has taken him.