The longsword is a kind of European weapon that is depicted by having a cruciform-like hilt together with a grip that can readily accommodate two-handed use.

The European longsword was known to be quite popular from the years 1350 to 1550 during the late Medieval and Renaissance era and was continued to be utilized until the thirteenth and seventeenth centuries.

Origin and Evolution of the Medieval Longsword

The longsword can be classified simply by using a number of swords, yet when it comes to its origin, it is a bit of a challenge to pinpoint where exactly it came from. However, the longsword was still a very popular blade during the late 1200s and 1300s.

In the eleventh to the thirteenth centuries, the swords that were carried and utilized by individuals who could afford such necessities are generally known in this day and age as the arming sword weapons that are designed to be utilized with a small rounded buckler or a large shield in the wielder’s off-hand.

These types of Swords could be utilized for slashing, thrusting, or even for thrusting, and this could also easily lend itself to defending, parrying, as well as attacking.

Due to the continuous development and evolution of a soldier’s armor, shields began to lose its popularity around the very first few decades of the fourteenth century; so with that, soldiers and knights had one of their hands-free which was a signal to create a more appropriate sword for them to utilize in battle.

Because of this, swords that were created became much longer on both the blade and the handle, allowing the wielders to better grip the weapon with both their hands; this is to increase the power of their attacks, as well as their control over the weapon.

This weapon was called the longsword which was also referred to by numerous people as the bastard sword / English longsword, the half and a half sword, as well as the war sword.

Yet at some point, gunpowder was introduced to the battlefield and shortly, it was followed by the invention of the very first cannons. These were quickly imitated by little hand cannons that in turn, evolved into the rifles and muskets that were mostly utilized during the seventeenth and the eighteenth centuries.

Because of this evolution, even the medieval longsword lost its popularity on the battlefield since its power and strength for hand to hand battles became unnecessary compared to its importance during the fourteenth century.

Characteristics of the Medieval Longsword

The Medieval longsword was commonly wielded in battle with both hands though some other types of longswords were utilized with just one hand.

The longsword was generally known as a cutting weapon that featured two-edged blades plus a handle that was long enough to accommodate two hands.

Its length measured around forty to forty-eight inches while the handle of the longsword measured around ten to fifteen inches. Its extended grip allowed the wielder to hold the weapon with two hands to execute stronger and more powerful attacks.

This weapon weighed between five to eight pounds and was utilized as a close-range weapon; it was also capable of executing a massive blow that was highly vital for fights on the battlefield.

The blade of the longsword was straight and mainly double-edged; as for its construction, the longsword’s blade was made to be thin but with adequate strength that was provided by careful and thorough blade geometry.

Throughout time, the weapon’s blades became thicker in the cross-section, slightly longer, considerably pointed, and less wide compared to the previous version of the sword.

There are numerous types of longswords that were available in history, and listed below are the following:

These were primarily created for cutting and the handles of these weapons were either for two-handed use or were hand-and-a-half.

The blades of the XIIa were flat, broad, and evenly tapered that also featured a fuller that ran about 2/3 of the weapon’s length, as well as a lenticular cross-section. The great sword within the context of the historical medieval longsword is a kind of an enormous specimen, specifically the XIIa type.

This type of weapon was referred to a variety of names such as the big swords of Germany, the Grans Espées d’Allemagne, and the German Longsword.

Known as the classic double-handed estoc that appeared during the fourteenth and fifteenth centuries; the blades of these weapons were narrower, strongly tapered, and more slender compared to the blade of the single-handed type, the XV variant; the type XVa also featured a diamond cross-section unlike the other types. 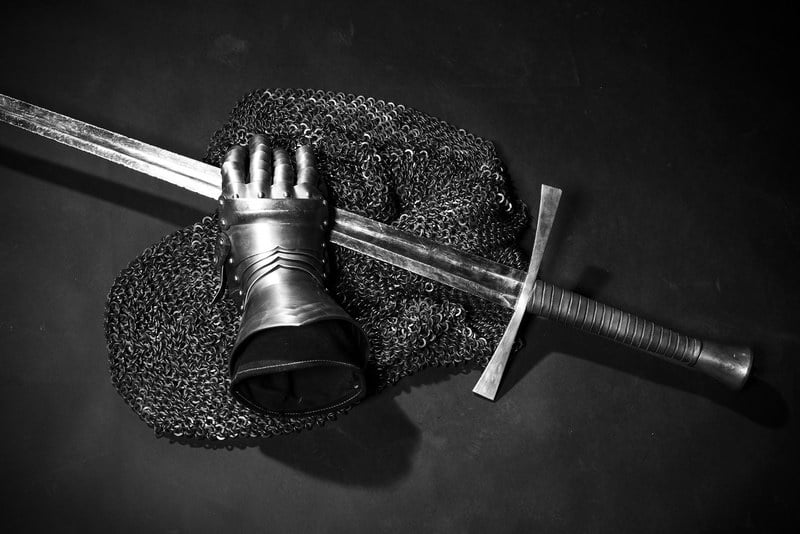 Type XVIa is said to be the classic longsword that was commonly utilized during the fourteenth and fifteenth centuries; these also featured a flat hexagonal-like cross-section, as well as a fuller than ran along 1/3 of the weapon’s blade.

These are the much shorter types of the longsword and were greatly popular during the middle fourteenth to the early fifteenth centuries. The blades of the XVII type were slender, long, with an acute tapering that approached the XVa’s outline.

These types depicted the much later longswords of the middle fifteenth to the early sixteenth centuries with flat, diamond cross-sections that usually featured a distinct mid-rib.

The blades of the XVIIIb type were said to be slender enough to be compared to the blades of the XVa; although this characteristic is similar, the blades are actually longer, measuring about ninety to a hundred and seven centimeters combined with a corresponding long grip.

For the XVIIIc, its blades were shorter and broader, measuring about eighty-five centimeters; at times, these blades featured a narrow and shorter fuller.

These blades featured an octagonal or lenticular cross-section, as well as a broad appearance; its most evident aspect was that the blades featured three fullers, two hollow parallel fullers, and a hollow central fuller that ran along the blade’s half.

These were mostly utilized during the fourteenth and fifteenth centuries.