Mune – Back of the Sword

Mune Katana is known as the harder cutting-edged than the spine part of the Japanese blade. The difference lies in the use of clay on the blade during the cooling process or quenching.

Having no clay or less clay allows the Ha to cool faster making the blade harder but, brittle while using more clay allows the Katana Mune to cool slower thus retain its resilience.

Mune is the opposite side of the tempered cutting edge of the blade. Hako-Mune has a square-shaped blade back. Hira-Mune has a flat blade back ridge.

Ihori-Mune means it has peaked back ridge. Kaku-Mune is another term for the square back ridge. Maru-Mune means round blade back. Mitsu-Mune has three-sided Mune Katana. Mune-Machi is the term used for the notch on the side of Mune.

After this, the blade is heated between 700 to 900 degrees Celcius then quenched in a trough of water. If a swordsmith is not satisfied with the hamon he can re-heat the blade and this time cool it slower.

A well-constructed blade will be able to bear 3 to 5 attempts. The average percentage of blades that survive this process is from 50% to 75%.

This process will make the Mune hard such as those with pearlitic steel. Blades that undergo this procedure will have very sharp edges while it remains flexible to handle stress and shocks. 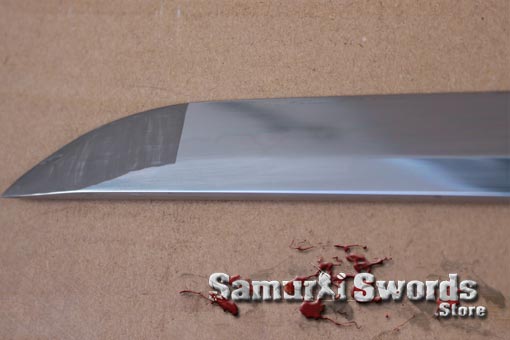 When used to hit a dog the blade broke letting the dog escape. When used on stone statues in the garden the blade broke like an icicle. In another story told, when the side was used against bandits it broke down.

In all of these testing, the blades with big hamon patterns were all broken. However, some say that using the side of the blades were really use for non-combat function and just to apply some blows.

The smith’s skills are required especially during the hammering of the Katana Mune. This process will force the blade to curve towards the cutting edge.

It is retempered for the purpose of restoring it to its best shape. It is never to deceive potential buyers. However, serious collectors will notice blades that were retempered.

The shape is changed from that of the original. Some proof may be seen in the weakening of the hamon above the ha-machi. Other marks show hammer marks on the Mune or stains made while reheating this part of the blade using a hot copper block.

During the reheating process, the area will show an uneven color. All of the processes will reduce the curve of the blade to return the mune to a straight line.