Katana Hamon – What is Hamon

This has a different HRC base on the Rockwell scale on its Ha (cutting edge) and Mune(back of the blade). When polishing blades and there appears to be an underlying temper line beneath the Hamon this is not true natural Katana Hamon.

To create less confusion and for beginner’s benefits, Hamon is the wavy line on the cutting edge of the Katana. The cloudy effect while the blade is being quenched is the result of using Nie crystals forming the metal into harder steel.

Keep in mind for those who are about to buy swords that a sword with the visible presence of a visible Hamon does not mean that it is less functional. Some sellers are known for using a fake hamon to increase the price of the sword that he is selling.

The process of making the Hamon Katana is referred to as Tsuchioki. To attain such differential hardness on a single blade the swordsmith uses different layers of clay. He uses a thinner clay on the edge and thicker clay on its edge.

After this, he begins the heating process. He heats the blade from 700 to 900 Celcius. He quenches the blade by immersing this in a trough filled with water.

Some may not be aware of this that when the swordsmith is not satisfied with the Katana Hamon he will reset the heat and let the blade slowly cool. He will try to do the same process however; he can only repeat this up to five times.

This is the most challenging part of Yaki-ire since about 50 % to 75% of blades are said to be capable of surviving this process. This process produces a Mune with a hardness of ~40HRC or pearlitic steel and Ha >55HRC or martensitic steel.

Blades that reach this stage will have very hard edges while it remains flexible when handling metal stress or shocks during the fighting.

Thus the objective of the process is to produce hard steel. Gaining such beauty through this process is just treated as a side effect. 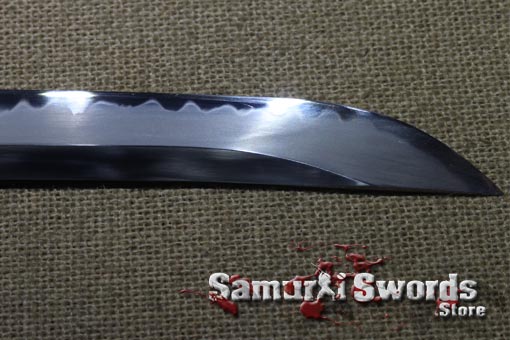 How to Distinguish Real from Fake Katana Hamon

Hamon is considered fake if it is cosmetically used on a non-differentially tempered blade to make it visually appealing to buyers. Production costs increase when they use real hand clayed temper.

Keep this in mind when trying to buy a super bargain sword. It is reasonable to say that those with real Hamon go beyond $200 or $300 in terms of price. The best way to know is by comparing real and fake hamon.

Sometimes the easiest way to do this is to use a microscope to look for Nie crystals. However, not all people have this equipment.

Have somebody knowledgeable come when buying a sword. Being an expert will assure the buyer that he is purchasing a good investment.