It is easy to recognize the unique wavy patterns also called Hamon line on Japanese swords and those who are not fond of the weapon are asking why such a thing is visible on the swords and if these patterns are bleached, lacquered, or etched.

The patterns seen on the swords are the hamon which marks the portion of the steel that has been hardened so it can eventually be sharpened adequately.

When it comes to swordsmithing the hamon line – literally the blade pattern – this is a visual result on the blade due to the hardening method.

The sword’s hamon is the outline of the yakiba (the hardened area) where the ha (cutting edge) can be located. Blades that are created this way are called the differentially hardened swords and these have a harder cutting edge instead of the mune (spine).

The difference in the hardness results from the clay that is used on the blade even before the quenching or cooling process. Little or no clay will allow the edges to cool quicker, making the blade harder but more brittle; while more levels of clay allow the hira and mune to cool much slower and it also lets the blade keep its resilience.

The hamon line is greatly influenced by the tsuchioki / tsuchidori which is a special type of clay coating application. The numerous hamon line patterns are subject to the common aesthetic trends of each Japanese period; additionally, it also displays the various features of the period, school of production, and the province.

The katana hamon is also a good way to determine the swordsmith’s skill level of creating swords. Listed below are some of the most common variations of hamons:

The choji hamon is one of the oldest hamon patterns and it is also called the cloved pattern. It has been utilized from the Heian period until today, and numerous types were utilized and developed.

The saka choji, juka choji, and the kawazuku choji are just a few variations that were created.

This pattern became a hit among swords that were created before the eighth century, and a lot of popular swords (especially those from the Rai and Awataguchi schools) display this type of pattern.

The suguha or straight pattern can be organized into several types, mainly by the width of the hamon line. The narrow suguha is called the hoso-suguha, the medium is the chu-suguha, and the wide one is the hiro-suguha.

This is considered as one of the oldest patterns for the katana hamon and it features a couple of irregular yet natural patterns; having a perfectly straight pattern is quite rare during the earlier periods of the swords. 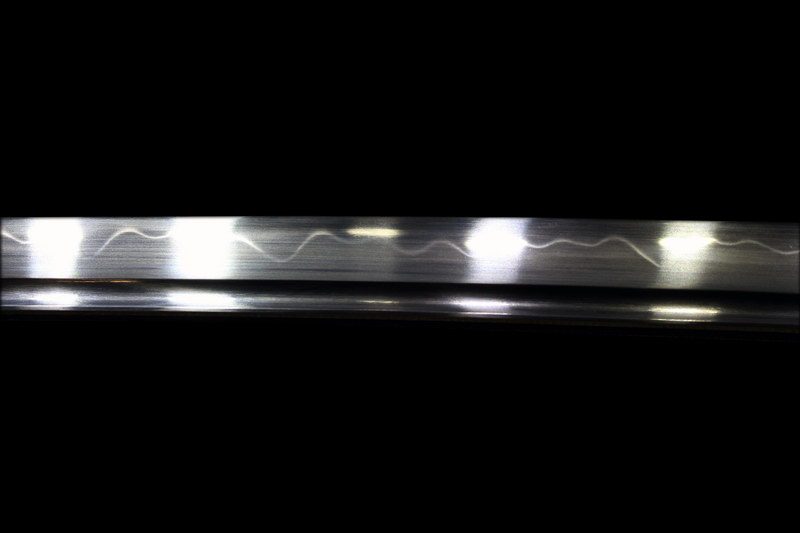 The wave hamon is also known as the gentle or billowing wave. This type of hamon has been utilized from the late Kamakura era until today.

Tani is the term utilized to describe the midare’s lower point while the o-notare and ko-notare are utilized to classify the notare based on the wave’s amplitude. In other cases, patterns are mixed with the notare and these are called the notare midare.

This is a set of waves that appear like semi-circles with similar sizes; and depending on its size, the katana hamon pattern can be called the o-gunome or the ko-gunome.

The process of creating the hamon line is called the tsuchioki and to achieve the differential hardness on a single blade.

After this, the smith starts the process of heating the blade from seven hundred to nine hundred Celsius; then after, the smith quenches the heated blade by immersing this in water.

If the swordsmith is not satisfied with the hamon line, he will reset the heat to allow the blade to cool slowly; this will give him the ability to redo the process but can only repeat this up to five times.

It is said that this is the most challenging part of the yaki ire since only fifty to seventy-five percent of blades survive the process; also, blades that reach this stage acquire very hard edges while still remaining flexible when handling shocks or metal stress during fights.

How to Distinguish Real from Fake Hamon Line

A hamon is said to be fake if cosmetics and other elements are utilized to create the look on non-differentially tempered blades; this is to make it visually appealing so buyers will purchase the sword.

Making use of real hand clay temper increases the production cost which is why a lot of sword manufacturers today fake the hamon line; this is something to keep in mind when purchasing a super bargain weapon since the reasonable price for a sword with a real hamon line goes beyond two hundred or three hundred dollars.

One of the best ways to compare the real and fake hamon is to check with a microscope and look for Nie crystals; however, not everyone has this equipment so it would be best to bring someone who is knowledgeable when it comes to purchasing swords or do a background check on the seller.

This is to see if they are legitimate sellers of high-quality blades that do not have fake hamon lines.