The falchion sword was known to be a single-edged and one-handed weapon that was of European origin and has a design that is similar to the Chinese dadao and the contemporary machete.

The falchion sword was featured in a variety of forms that have appeared during the thirteenth up to the sixteenth centuries wherein a couple of the falchion blades appeared just like the seax, as well as the later saber. In other versions of the weapon, it appeared like an irregularly-shaped weapon or a machete with a crossguard.

At times, it is presumed that this type of sword had lower status and quality compared to the more expensive and long swords.

The falchion was said to be a peasant’s tool or weapon but this was not always the case when it comes to this piece the Conyers falchion was said to have belonged to a landed family and it was also a weapon that has appeared in various illustrations of mounted knights in combat.

When it came to the later blades, these were more ornate and utilized by the nobility; in the year 1560, the weapon often appeared as an elaborately gold plated and engraved falchion that was part of the Wallace Collection.

Origin of the Falchion Sword

When it comes to the falchion, there is no specific origin that has been identified for the weapon; there were some who claimed that the falchion sword first came from sharp and pointed farming tools but numerous historians have disagreed.

These types of weapons were said to have been common and quite popular among the crusaders from the middle ages, and these were also greatly favored by the knights despite the belief that the weapon was of low quality.

There were also some documents suggesting that the falchion was the third main weapon of men-at-arms while it was the secondary weapon of the knights.

There were some who have also assumed that the falchion sword was based on the scramasax of the Franks which was described as a single-edged knife utilized for fights; records have also stated that the single-edged weapons were seen in Scandinavia where a lot of Vikings utilized the piece.

The falchion sword that was found in the area was said to have an equally broad blade throughout the length that was also straight unlike other swords. 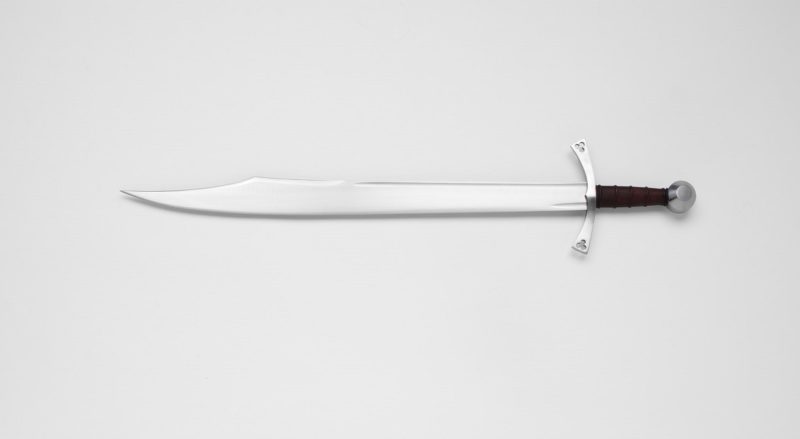 Characteristics of the Falchion Sword

The medieval falchion was described as having an arched, single-edged blade while its European category featured a short back-edge. It was a great weapon that combined the power and weight of an axe but was similarly versatile as the sword.

There were several types of falchions during the eleventh throughout the sixteenth century and some of these resembled a knife more than a sword; aside from these, there were also other types that appeared with an irregular and pointed shape.

The medieval falchion sword had a total measurement of about thirty-seven to forty inches in length while it weighed about one to two pounds in total.

The weapon was also generally made out of steel and iron and its blade’s most average design was broad, single-edged, yet slightly curved; some of the falchion blades appeared with an irregular point and shape.

Generally, these weapons were mostly utilized for cutting off the enemy’s head or limbs, as well as slicing unprotected portions of their body with just a single stroke.

The blade design and style of this weapon varied greatly and these differed throughout the ages and across the continent. The sword almost always featured a single edge with a slight arch towards its point and was mostly fastened with a quillon crossguard.

Compared to the double-edged European swords, only a few of the falchion actually survived through history and only less of a dozen samples are currently known in this day and age. The two general kinds of falchion blades are identified:

The cleaver falchion is one of the few surviving pieces of this type of weapon and is shaped similarly to a huge meat cleaver or large-bladed machete; this kind of sword is said to have been confined during the thirteenth and fourteenth centuries. Current theories state that these weapons were the anti-cloth armor of that era.

Most of the depictions of these swords in various artworks exhibit a design that is similar to the großes Messer; as for the surviving sample of the cusped falchion, it was said to have come from the thirteenth century in England and was known as the Thorpe Falchion.

This type of falchion weighed less than two pounds and its total length was thirty-seven and a half inches (where thirty-one and a half inches of its measurement was for the straight blade; additionally, the blade featured a flare or cusp-clipped tip that was the same as the Kilij from Turkey.

In addition to the previously mentioned falchion types, there was a group of the thirteenth and early fourteenth century blades that were commonly identified as falchions.

The weapons were described by having a falchion-like blade that was fixed on a wooden shaft that measured around one to two feet in length; it was also said that it curved at the end just like an umbrella.

There are only a few actual falchions that have survived until the present, yet since there are numerous producers who actually replicate the weapon, one can simply browse through a plethora of online weapon shops to actually purchase a falchion sword for sale.

The falchion is available in two types: the fully functional piece which can be utilized for cutting practice and training, or the decorative piece which can be added to a collector’s growing set of medieval pieces. The decorative falchion sword can also be utilized to decorate one’s home, giving it a classic medieval feel especially for those delight in the weapons of the past.

Before purchasing a falchion for sale, always remember to do a background check on the shop or seller; make sure that they create weapons that are made from safe and high-quality materials to ensure the safety of the person who will eventually purchase and wield the falchion.