A nihonto is known to be one of the several kinds of traditionally made Japanese swords; these weapons have been created from the Kofun era and generally, the Japanese swords that have double edge are those that have been produced after the Heian era.

There were numerous types of Japanese swords that differ in shape, size, as well as the field of application and how it was manufactured. For the more commonly known kinds of nihontos, these are the wakizashi, katana, and the tachi.

Historically, the katana was one of the swords utilized by the samurais of ancient Japan and it is characterized by its distinct appearance – a single-edged and curved blade that has either a square or circular shaped tsuba, as well as an extended tsuka to readily accommodate two hands when wielding the sword.

The double edge katana features two bohi; one of its edges goes all throughout the end of the blade’s tip while the other reaches about 1/3 up the blade. The combination of the shape and the bohi provides a sword that is light and very functional.

The double edge katana was designed primarily to cut light targets easily while also being fully functional for tameshigiri. It also gives the distinct double edge katana with a rarely seen style, great handling, and superior heat treatment that makes it perfect for test cutting.

Yasutsuna Amakuni is known as a legendary swordsmith who is said to have created the very first single-edged sword which is the tachi; it also featured a curve along its edge and was made around 700 AD in the Yamato province.

He was employed by Japan’s emperor during that period to create various weapons for battle; his son named Amakura was the successor of Amakuni’s work.

Although there are almost no contemporary samples of signed creations by Amakuni, legend says that the double edge katana – the Kogarasu Maru – was forged by him. 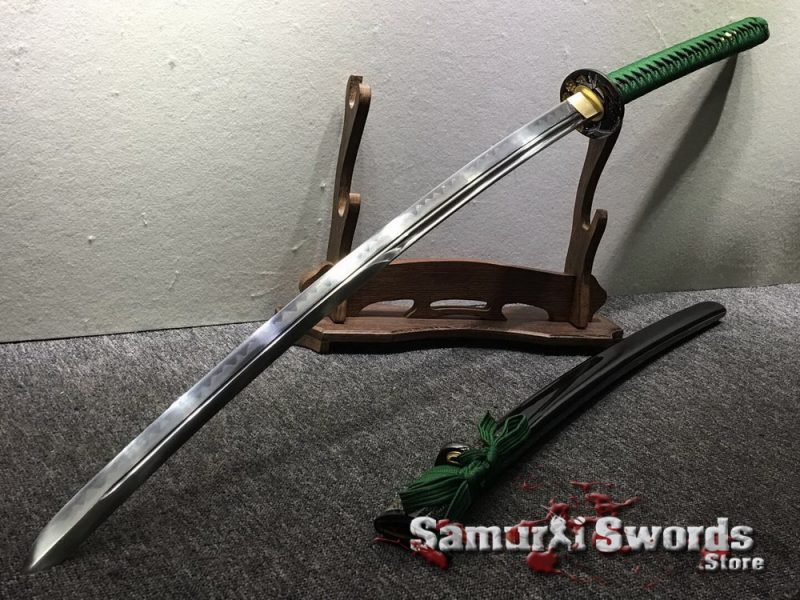 The real author of his work is unknown but this has some similarities to the creation of various Yamato schools. The Kogarasu Maru was fashioned with an arched double edge blade which is about 62.8 centimeters in length.

One of the blade’s edge has the normal shape of the Tachi, but unlike the Tachi, its tip is symmetrical and both of its edges are sharp except for the concave that is found close to the hilt.

A koshi-hi styled groove runs throughout the tang to its changing point where its blade becomes double-edged and is accompanied by the soe-hi. The hardening method yielded a suguha hamon on each side of the blade.

Double edge blades provide additional versatility when it comes to numerous effective cuts; with double-edge swords, every stance and movement can be transformed into a thrust or cut without having to worry about which side faces the enemy.

Double-edged blades, just like the double edge katana, are quite difficult to create, particularly during the ancient period of Japan when a smith was required to pattern-weld the steel.

As a result, the blade can be weak but despite this, the double edge katana can readily cut upwards easily and quickly, especially right after a downward slice which can be a great advantage.

Additionally, a double-edged blade is superior in all aspects, especially if one prefers a straight sword with a minimalistic type of handguard.

Other Types of Double Edge Blades

The ken is not really considered as a tanto, however, it is commonly utilized and is also thought of as one. These are considered to be straight, double edge blades that are commonly utilized for Buddhist rituals; moreover, these can also be made out of spearheads that were cut shorter or broken.

These were also often given as offerings from the smiths every time they visited a temple. The tsuka of the ken tanto was usually made with a Vajra – a double thunderbolt that is linked to Buddhism.

The ken was utilized in Japan from around the third until the sixth century and at the end of that period, the double-edged swords were superseded by the weapons with a single edge, which all later nihontos were developed.