The Boshi is more than just an aesthetic part that runs along the Kissaki of the blade. This may look simple but, it requires a great deal of ability and expertise in order to create this pattern.

Boshi Katana demonstrates the abilities of the swordsmith. If the Katana Boshi turns back towards the Nakago where it touches the back of the blade or Mune this is referred to as Kaeri.

Out of the patterns that fall under this part of the Hamon exhibit Kaeri. Boshi Agaru refers to the loss by broken point or other causes. Boshigata refers to the very smooth round Yamashiro style shape of the temper line at the Kissaki point.

Boshisaki is the very tip of the temper line. Daijiri is Katana Boshi that resembles a gun butt it is categorized as turn-back. Eboshigata is a term for a pattern that looks like a court headgear.

Fukura Kokoro is the line characteristic of Yamato swordsmith. When a blade is referred to as having Futae Boshi this means it has double hamon in point that includes the turn-back. These can only be seen on blades made by Higo Kuniyoshi, Fujishima Tomoshige and Sadamune. 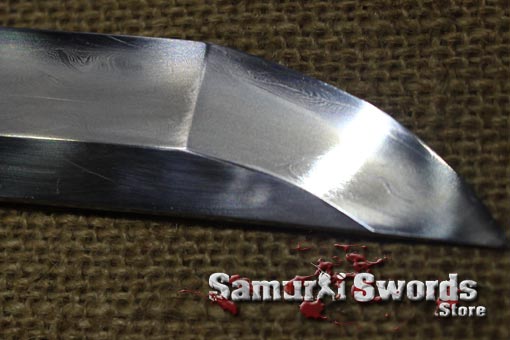 Chips in Ha or Kissaki. Similar to the case of the broken Kissaki. The problem may not be fatal if this does not extend thru the hamon.

Karasuguchi. This is also known as crow’s beak hagire. It is a fatal flaw if there is a crack.

Nioi Gire. This is known as interrupted Hamon. It is considered a major fatal flaw if the hamon is interrupted or is off the boshi
There are numerous kinds of defects of flaws that can be found in Japanese sword blades.

It is always a good idea to check this carefully by examining the blade closely before purchasing it. Some of these flaws are too subtle to distinguish.

These cannot be noticed by those who are not experts since they will not know where to specifically look for these. The use of a magnifying glass is also required.

Some experts advise to sight down the back or Mune of the blade from the Nakago (tang) or Kissaki (point)to see if the blade is bent.

Take time to examine the blade because once it is purchase it would be hard to file for a complaint about seeing a flaw once this is delivered.