There are numerous weapons that have been utilized during the warring period in Japan and today, fully functional replicas have emerged wherein these feature certain elements such as the bohi.

The bohi – which is also called the fuller or blood groove – is a beveled or rounded slot on the blade’s flattened side. It runs down the length of the weapon’s blade and it functions by making it more lightweight; it also alters the balance point of the blade, making it swift, quicker, and easier to wield.

The bo hi also provides an excellent tachi kaze (the sword wind sound) when an individual swings the weapon, providing great feedback on its angle as well as the speed of one’s cut. The form of the blood groove helps decrease any loss of durability and it also acts similar to an I-beam as how it is utilized in the construction industry.

When it is combined with the right distal tapers, blade tempering, and heat treatment, a blade with a bohi can either be twenty to thirty-five percent lighter compared to a no hi blade without sacrificing the blade’s integrity or strength. The effect of this feature lessens once the blade’s length is decreased.

The Bohi as a Tool

When it comes to the tools of blacksmiths, the fuller is considered as a kind of swage – it has a distinct shape that is forged right in its surface. It is also utilized for engraving that specific shape into the metal.

These tools are often seen with handles yet feature a variety of shapes for its heads; the swages are set in between the workpiece and the hammer to allow the smith to transform the steel into a variety of shapes that would be impossible to achieve using just a hammer.

As for swage blocks, these are usually like anvil blocks that have a variety of shapes that are forged in them; swage is a term from the Old French word souage which means ornamental mould or decorative grooves.

Generally speaking, the blood groove is a swage with a bevel or cylindrical face and it typically measures around three to six inches in length.

If a groove will be applied on either side of the steel, two bohi may be utilized at the same time and this will press the workpiece right in the middle. 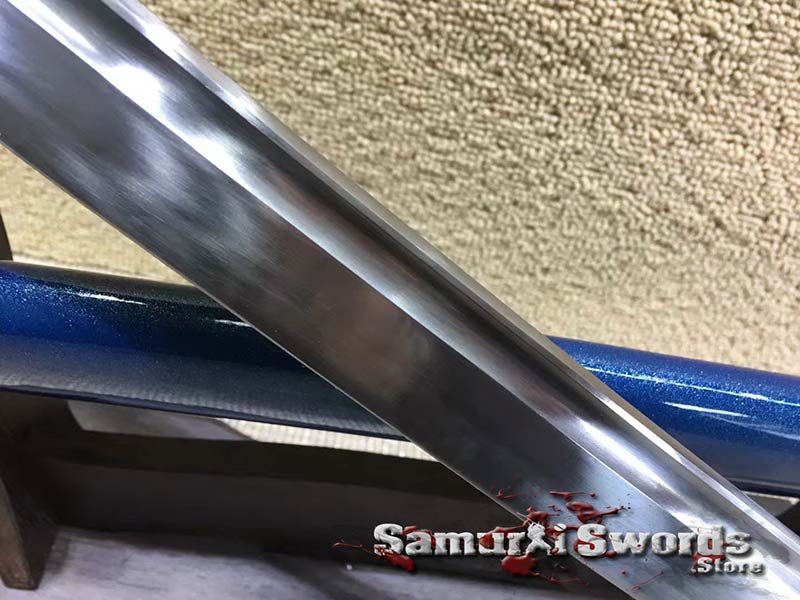 It is common that a single bo hi will have a peg that is securely held in the anvil whereas the other bohi will feature a flat head and a handle that will be utilized for striking using a hammer.

A blade that has a fuller will slowly be pulled through these while being hammered; this will continue until the whole groove reaches its necessary shape and depth.

As fullers create the groove, these usually displace the material back to its side to create ridges just around the grooves.

The ridges can also be hammered flat enough to widen the blade; if not, these are usually shaped using other swages, increasing the toughness of the blade by creating thick portions in its cross-section.

When it comes to bladesmithing the Japanese way, the bohi katana has a lot of rich terminologies and traditions that are enough for these to have separate terms for its top (the hi) and the bottom (tome) ends. Here are some of the terms:

This is basically a continuing straight groove that has an adequate width; on a tanto, this is called the katana-bi and for the soe-bi, the secondary narrow groove comes after the inner-straight radius of the main one. The tsure-bi’s secondary groove is quite similar but instead, it continues after the straight length.

These are simply two grooves that are parallel in position.

This is a blood groove that is shaped like an iris plant’s leaf.

A small bo-hi that has a top that is angled opposite from the blade and is commonly set together with the soe-hi. These are more commonly seen on naginatas.

The Koshi-hi is a short groove with a rounded top that is found close to the bottom of the blade and also near the tang.

This has two grooves that are thin and run throughout the top-half of the blade; its bottom half is denoted by the blade’s exterior groove and stopping halfway while the interior groove stretches out to fill the width.

The Kaki-nagashi is the groove that closes to a pointed end that is halfway down the tang.

This type of groove runs throughout the end of the tang.

The Kaku-dome is a groove that appears as a square end that is within three centimeters of the upper end of the tang.

This is similar to the Kaku-dome yet their difference is that it has a rounded end.

Whether the blade has a bohi or not, there is not much of a difference when wielding a weapon; its I-beam design is similar to that utilized in construction – if there is less material, then it is somehow reinforced.

The only main difference of a blade that does not have a bohi is that it is heavier while also having a more direct balance point, giving this more power but appears with less grace.